On a code review of some Unity code where HttpClient was being used, a comment was made to “Consider using HttpClientFactory”. Those three words resulted in many hours of intrigue and frustration, which I will document here.

Why we have HttpClientFactory

First, some background: Why does HttpClientFactory exist? There’s a long and sordid history to this.

An (in)famous post titled “You’re using HttpClient wrong and it is destabilizing your software” at https://www.aspnetmonsters.com/2016/08/2016-08-27-httpclientwrong/ outlines the first problem. Namely, although HttpClient implements the IDispose interface, you shouldn’t be spinning them up and disposing them regularly. By default this will create new network connections for each HttpClient instance, and then leave them in a TIME_WAIT state for a couple mins when disposed. Beside the fact creating new connections is expensive (with the TCP handshake and SSL overheaded on each new connection), every network connection you leave in this state is consuming resources, and at the extreme end you get “socket exhaustion”, where you literally run out of TCP/IP sockets to allocate.

So the outcome of that article is that you should allocate a static HttpClient and just continue to use it, thus reusing the network connections is allocates. This however, results in another serious problem as outlined in “Singleton HttpClient? Beware of this serious behavior and how to fix it” at http://byterot.blogspot.com/2016/07/singleton-httpclient-dns.html. Basically the problem with using a single HttpClient and continually reusing the connections, is that DNS changes will now never get picked up. Various performance and reliability solutions on the internet (such as Azure Front Door) use DNS changes to route clients to different endpoints depending on load and health. Some deployment features such as A/B testing or switching staging slots can also be implemented via DNS changes.

So just use that right?

(Note: My specific Unity project is using the .NET 4.x profile, so those are the APIs this post will cover)

Unity doesn’t use the “official” .NET 4.x Framework. It also doesn’t use .NET Core. It’s version of .NET is from the Mono project. (Actually a fork of this project, but that’s not important for now). As can be seen on their doc page .NET Profile Support, Unity support .NET 4.x and .NET Standard 2.0 profiles. Unfortunately HttpClientFactory was added in .NET Core 2.1 (which is .NET Standard 2.1).

But all is not lost. HttpClientFactory itself is contained in the NuGet package “Microsoft.Extensions.Http”, and if you look on NuGet at https://www.nuget.org/packages/Microsoft.Extensions.Http/, you can see this supports .NET Standard 2.0. However it has a loooooong dependency graph, depending on other packages for Logging, Options, DependencyInjection, etc. Beside the pain of getting NuGet packages into a Unity application, requiring the manual download and unzipping of packages (see this documentation page), there is another pain point.

The only way to use HttpClientFactory is via dependency injection, which also requires you to use the .NET hosting model. The only way to get an IHttpClientFactory interface (needed to create the HttpClient instances) is via dependency injection, by calling the extension method AddHttpClient on an IServiceCollection, and then having the hosting model create the instances where it is needed.

You can see on the GitHub issue at https://github.com/aspnet/HttpClientFactory/issues/55 where ways to use HttpClientFactory without depending on Dependency Injection and the associated hosting model have been requested, but at the moment that is still required.

I did not want to add a long list of NuGet packages and restructure the Unity app to use an IServiceProvider and Dependency Injection, so HttpClientFactory was off the table.

If we revisit the Uber-issue on GitHub, and specifically this comment you’ll notice the below:

Notice the ”..not working reliably across platforms..” bit. Sadly, Mono is one of those platforms. Using ILSpy on the Mono version of System.Net.Http.dll versus the other .NET implementations, it can been seen there are many things that are simply not implemented. Sadly, ServicePoint.ConnectionLeaseTimeout is one of them. 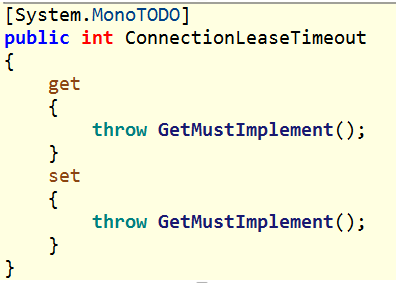 This left but one option: Figure out how all this fits together and write a custom solution.

How HttpClient works in Mono

HttpClient itself largely just delegates to HttpMessageInvoker, and it can be seen from its constructor that you can provider an HttpMessageHandler (which HttpClientHandler derives from), and also tell it not to dispose this message handler when it is disposed. This is the key to sharing connections across HttpClient instances.

But that then left me with a few questions, namely:

Cut to the chase

Long story short, while calling Dispose() explicitly on the HttpClientHandler kills the connection group, that class doesn’t have a finalizer (a destructor, in C# parlance). So when the garbage collector cleans up an HttpClientHandler, no code is invoked, and Dipose(false) is not called to clean up unmanaged resources.

The connections themselves are managed by a ServicePointScheduler, which tracks when an operation completes on a connection and will then close it when idle. See this code in the Mono repository

Effectively HttpClient and HttpClientHandler are just factories to create HttpResponseMessage objects (and corresponding HttpRequestMessage) against a specific ConnectionGroup. They do not hold any references to these objects, and refer to the ConnectionGroup by name only, as seen below. 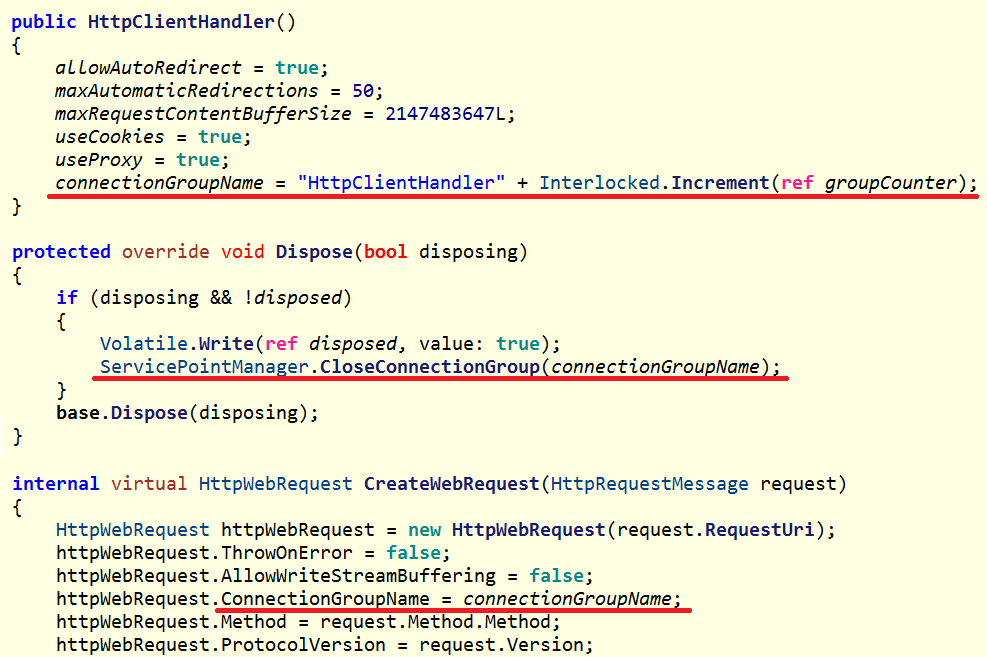 As long as you don’t explicitly Dispose the underlying HttpClientHandler, but instead provide your own and simply stop using it and leave to the GC to clean up when done, all is good.

Implmenting a UnityHttpClient with this approach allows for code such as the below, which returns only a stream, and the connection will remain active until the response is completed, even after the HttpClient and the underlying HttpClientHandler have long gone. The class will start using a new HttpClientHandler periodically to allocate new connections.

Using the excellent Memory Profilers Package in Unity, from the stream returned above, we can see it reference down to the underlying network socket. Also shown is the ServicePoint which holds a reference to outstanding operations and current network connections, (as well as idle connections to be cleaned up after the idle timeout). References of interest have been underlined. 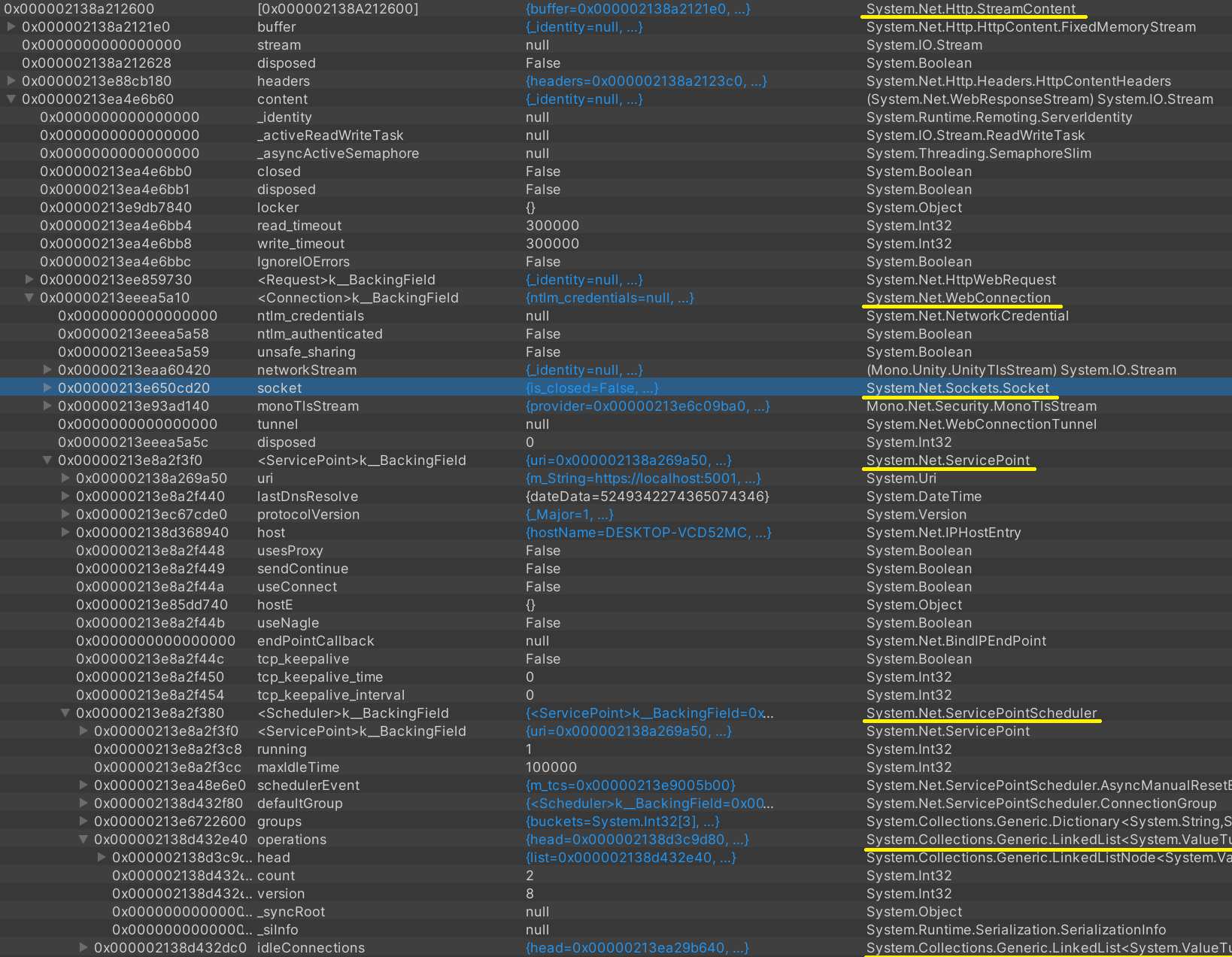 With the above in mind, how should the UnityClientFactory look? Below is the implementation I came up with. Note this allows for “named” clients to explicitly get a new set of connections (as outlined in the comments).

To verify the code behaves as desired, I created a simple web service that has two REST APIs. The first /api/item generates small and fast responses, and the second /api/blob for large and slow responses. This simple web server can be written in a few lines of C# code using top-level statements (as introduced in C# 9). The entire ASP.NET Core 5 project code is shown below:

Below shows the code to test the service. Of particular interest are lines 6 & 7, where the requests to the large and slow endpoint can either use the default handler, or be configured with their own handler. For the initial tests we’ll put everything on the same handler.

This code sends a new request every second. Note the condition if (reqId % 3 == 0) {...} that causes every third request to be to the slow API.

Running this code as-is we can see that pretty soon even the “quick” requests are getting backed up waiting for the slow requests to complete. The initial “fast” requests number 1, 2, 4, and 5 all complete within the expect 1 sec time. But once the second “slow” request starts (request 6), we see that all requests start taking a while to complete, as the two connections per origin limit is consumed with running the slow requests. 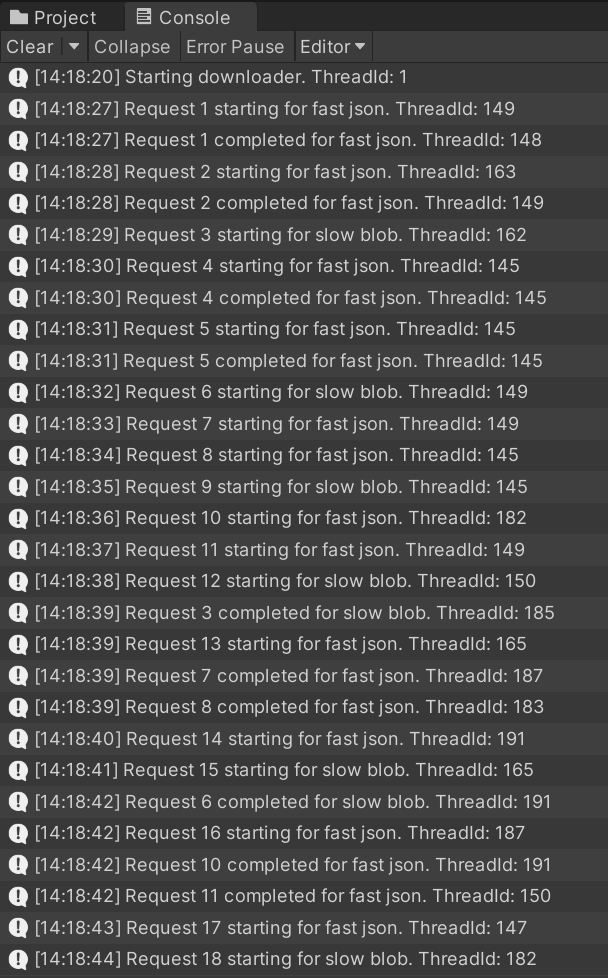 If we look at the object in memory, we can see in the scheduler that the default two connections are allocated, and there are a queue of operations waiting to run.

Objects with one handler 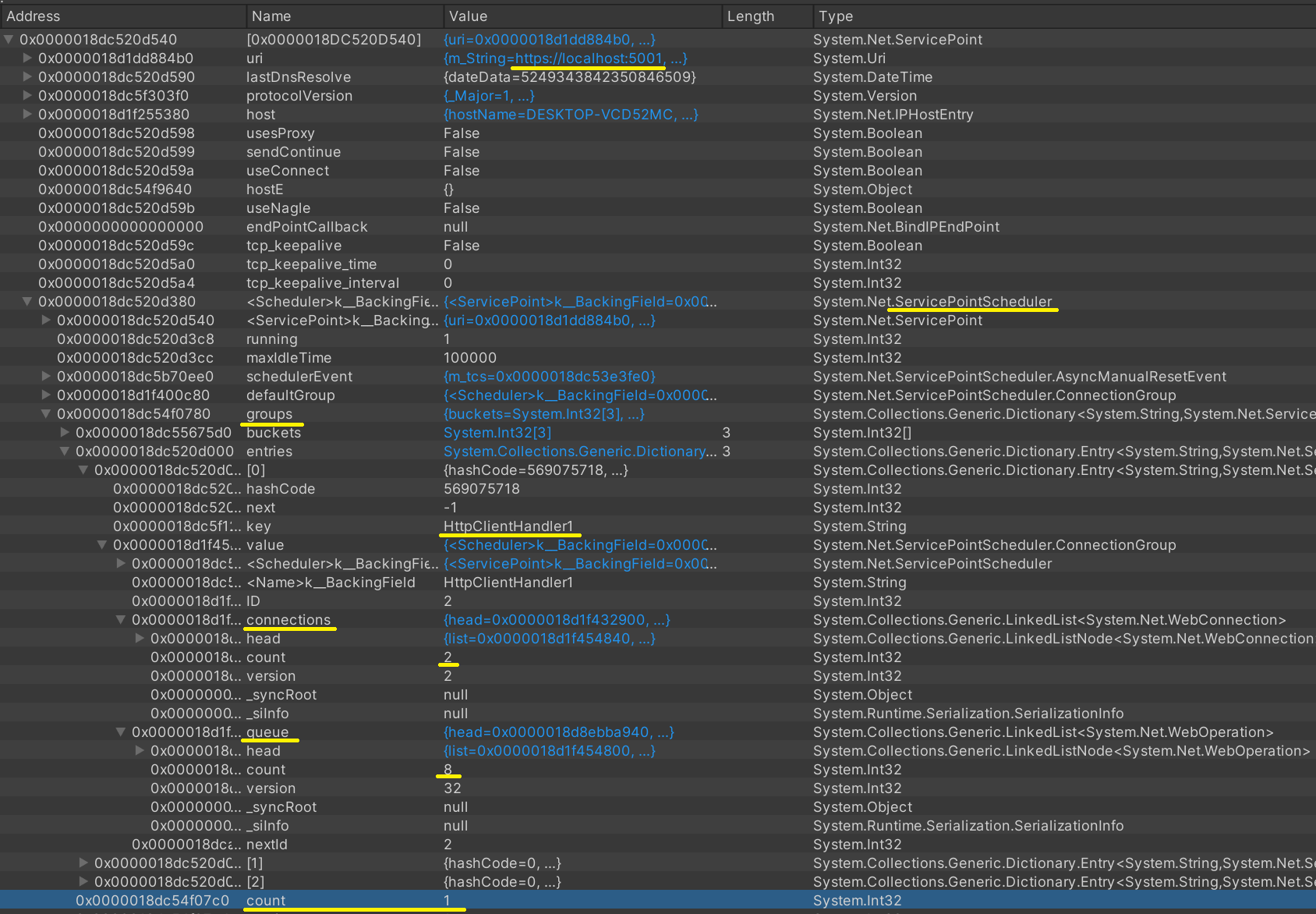 If we uncomment line 6 and comment out line 7, so that GetHttpStream is using its own dedicated handler group (named “slow”), we see that now all the fast API requests are completing immediately, even as the slow API requests start to queue up. 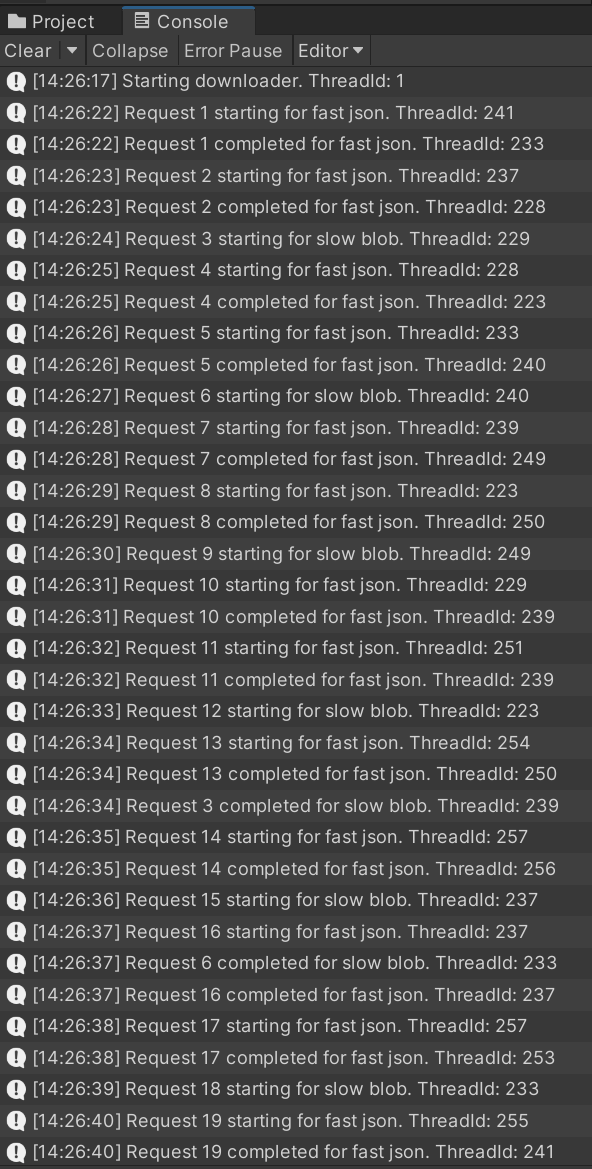 The objects in memory show us that there are now two ConnectionGroup objects contained within the ServicePointScheduler, and that the group named HttpClientHandler1 (the first group created for the fast requests) has an emtpy queue - even with slow requests waiting. Meanwhile the group created for the slow requests, HttpClientHandler2, has a couple items in the queue (as well as operations currently in progress). 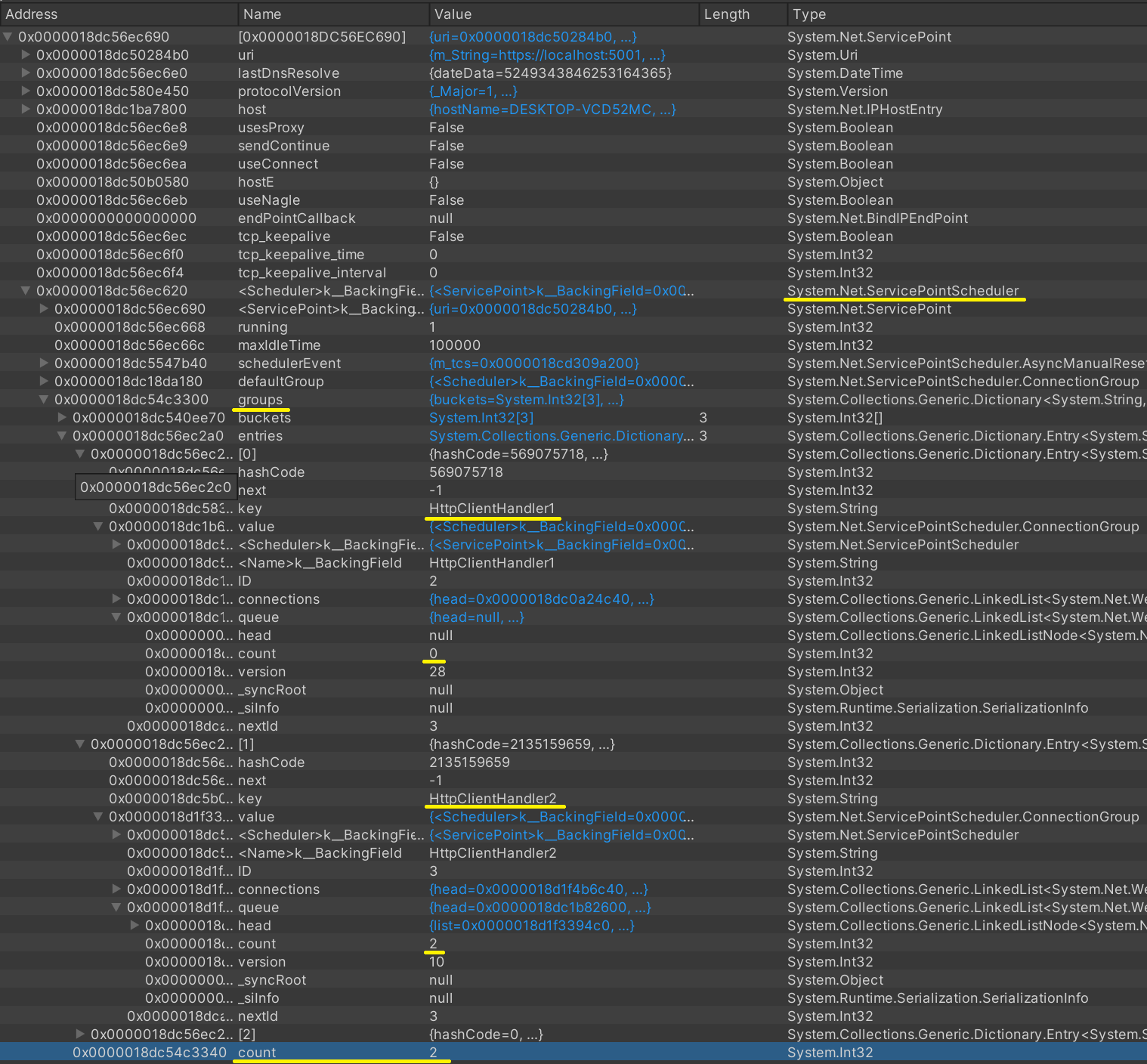 This shows that being able to provide a “named” connection group can avoid contention and blocking for requests on other groups.